With a view to strengthening historical, and in particular economic and business ties, between Spain and Florida, a ceremony was held on board the Juan Sebastian de Elcano Training Ship on 3 May 2013 to recognisethe ‘Friends of the Spain Brand and Spanish Brands in Florida. This is an initiative of the Leading Brands of Spain Forum in collaboration with the Office of the High Commissioner for the Spain Brand that recognises local figures who have distinguished themselves for their connection with Spain or its companies. The ceremony was chaired by the Minister of Foreign Affairs and Cooperation, José Manuel García-Margallo.

The recognition of the Friends of the Spain Brand in Florida was awarded as part of the celebration of the 5th Centenary of the discovery, by the Spanish explorer Juan Ponce de León, of the land he named  Florida. The arrival of the Spanish on the peninsula (the first by a European that has been documented) led to the beginning of the modern history of the US. 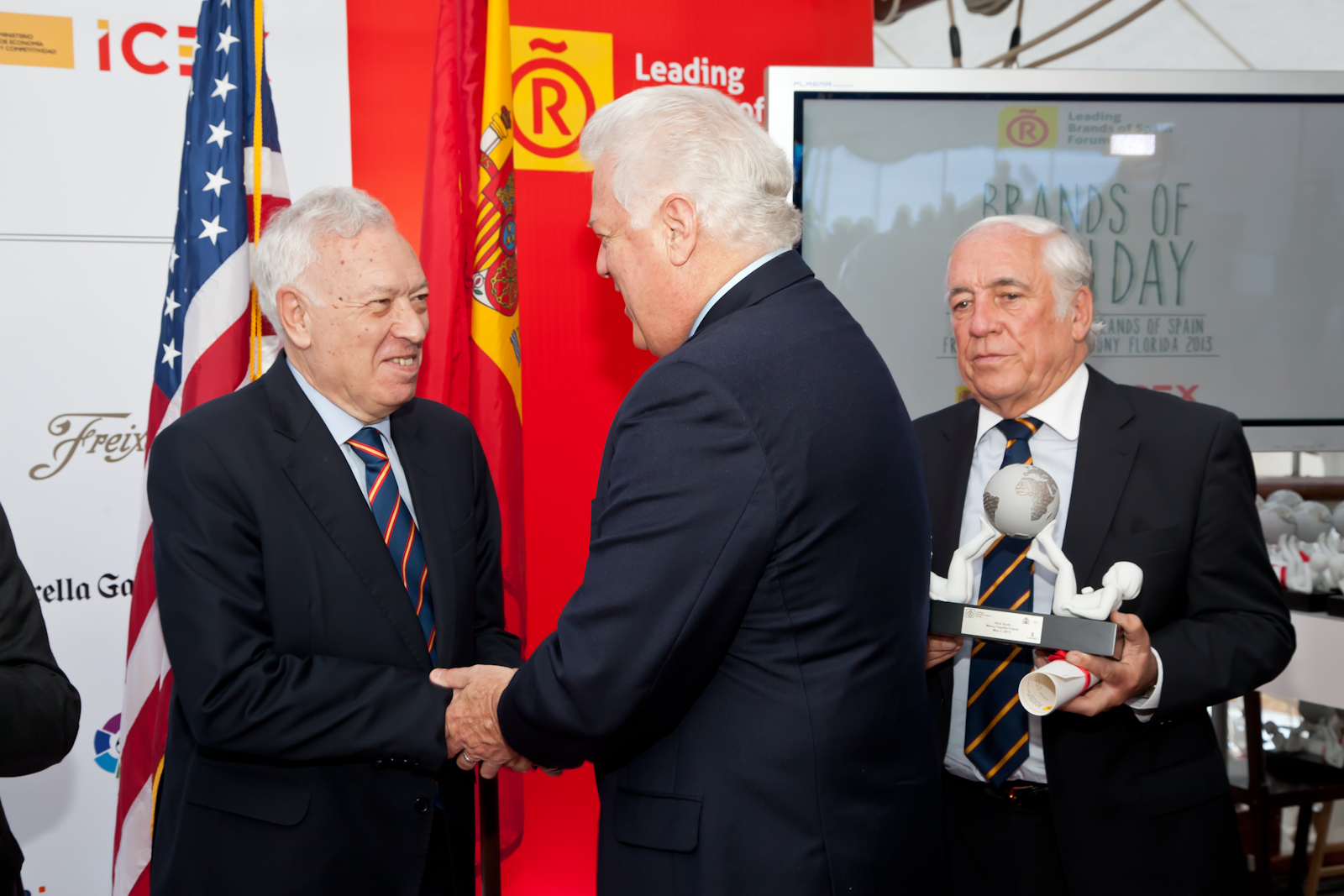 He has held the position since January 2011 and  belongs to the Republican Party. Ken Detzner, Secretary of State of Florida, picked up the award on his  behalf. The award was presented by the High Commissioner for the Spain Brand. 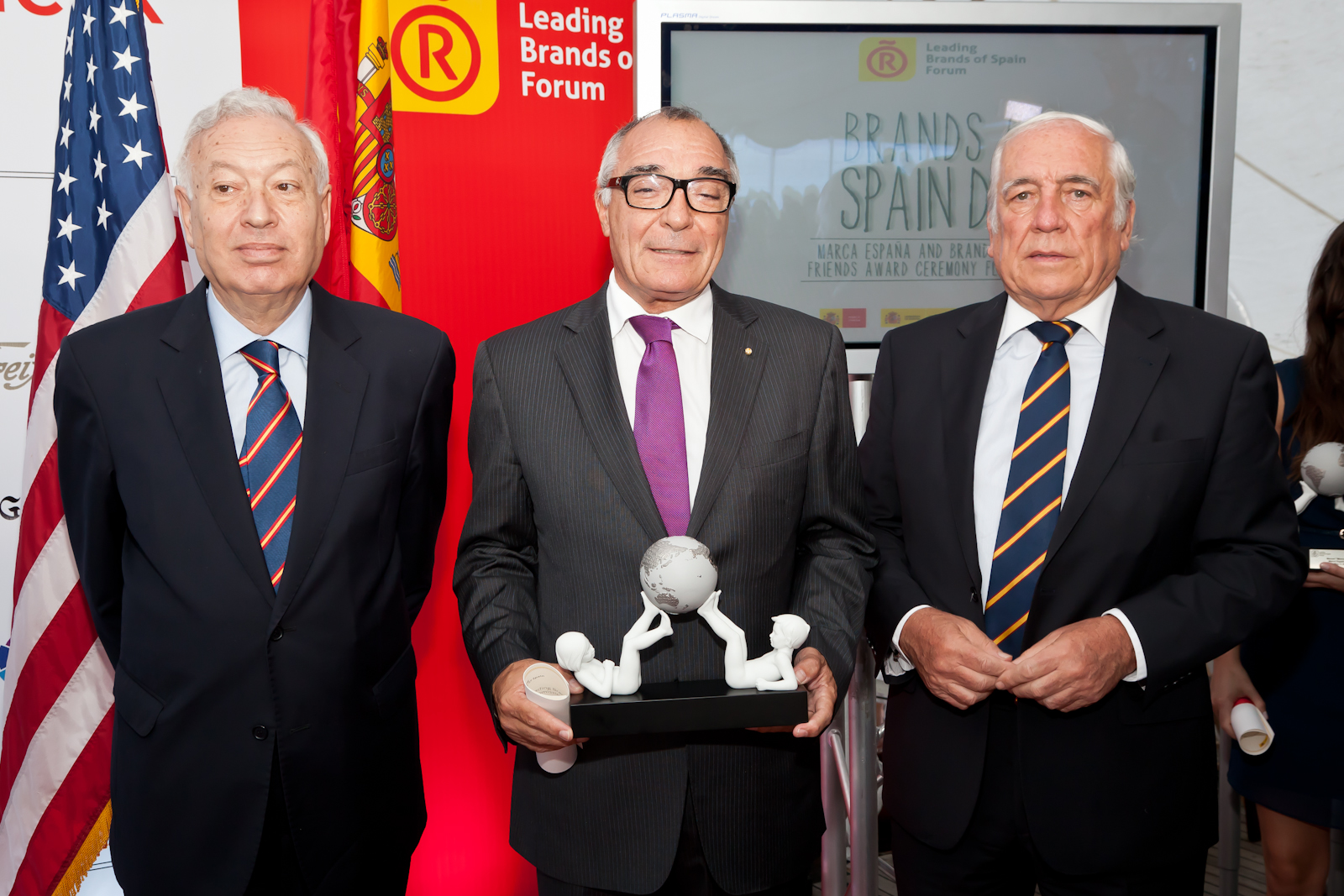 He has held the position since 2009. Before becoming mayor, he worked as a journalist. He was the director of Radio Miami Newscasts and reporter for Univision. The award was given by the Minister of Foreign Affairs and Cooperation. 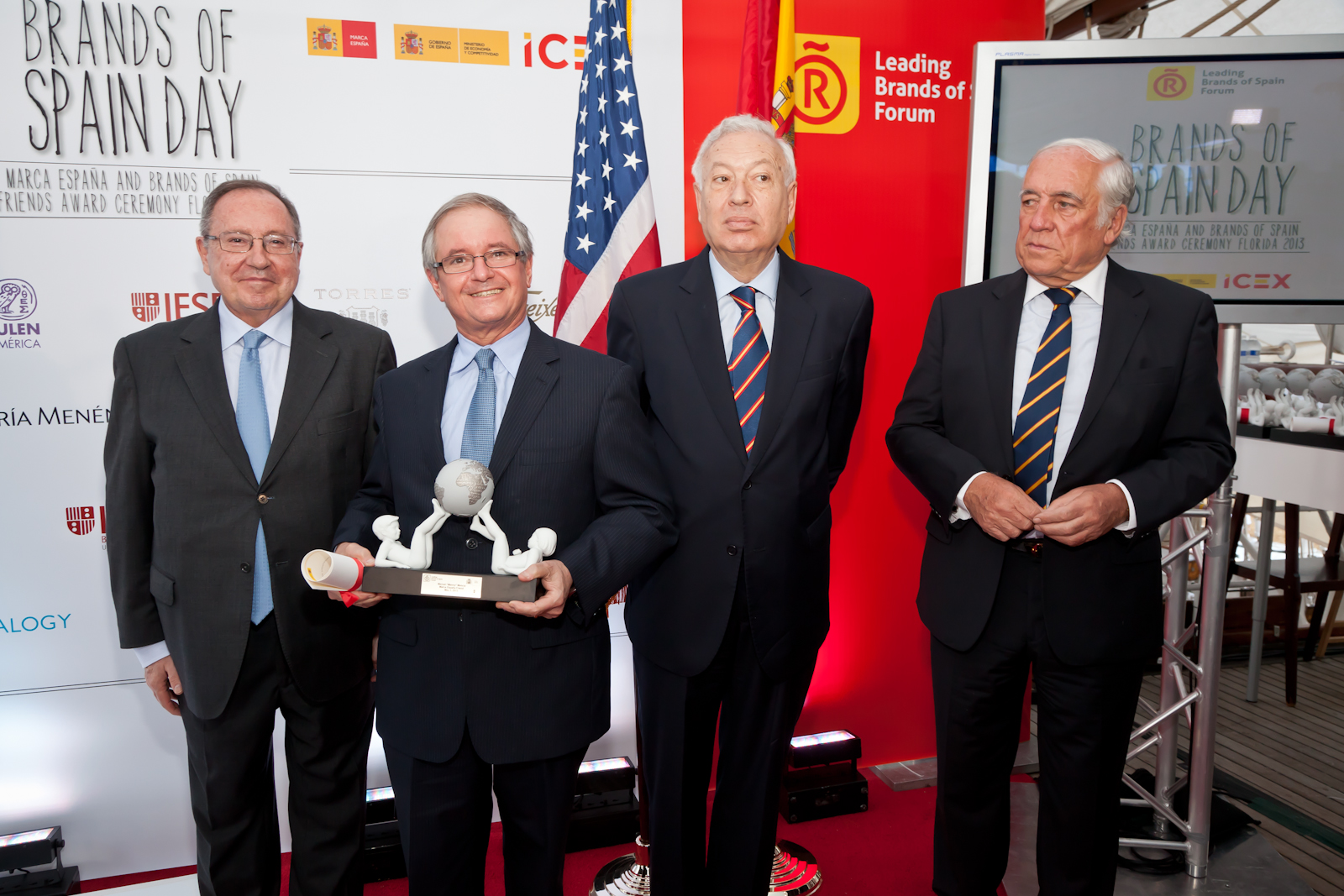 “Senior” Vice-Chairman of the Division of International Trade and Development of Enterprise Florida.

He received the award from the president of the Leading Brands of Spain Forum. 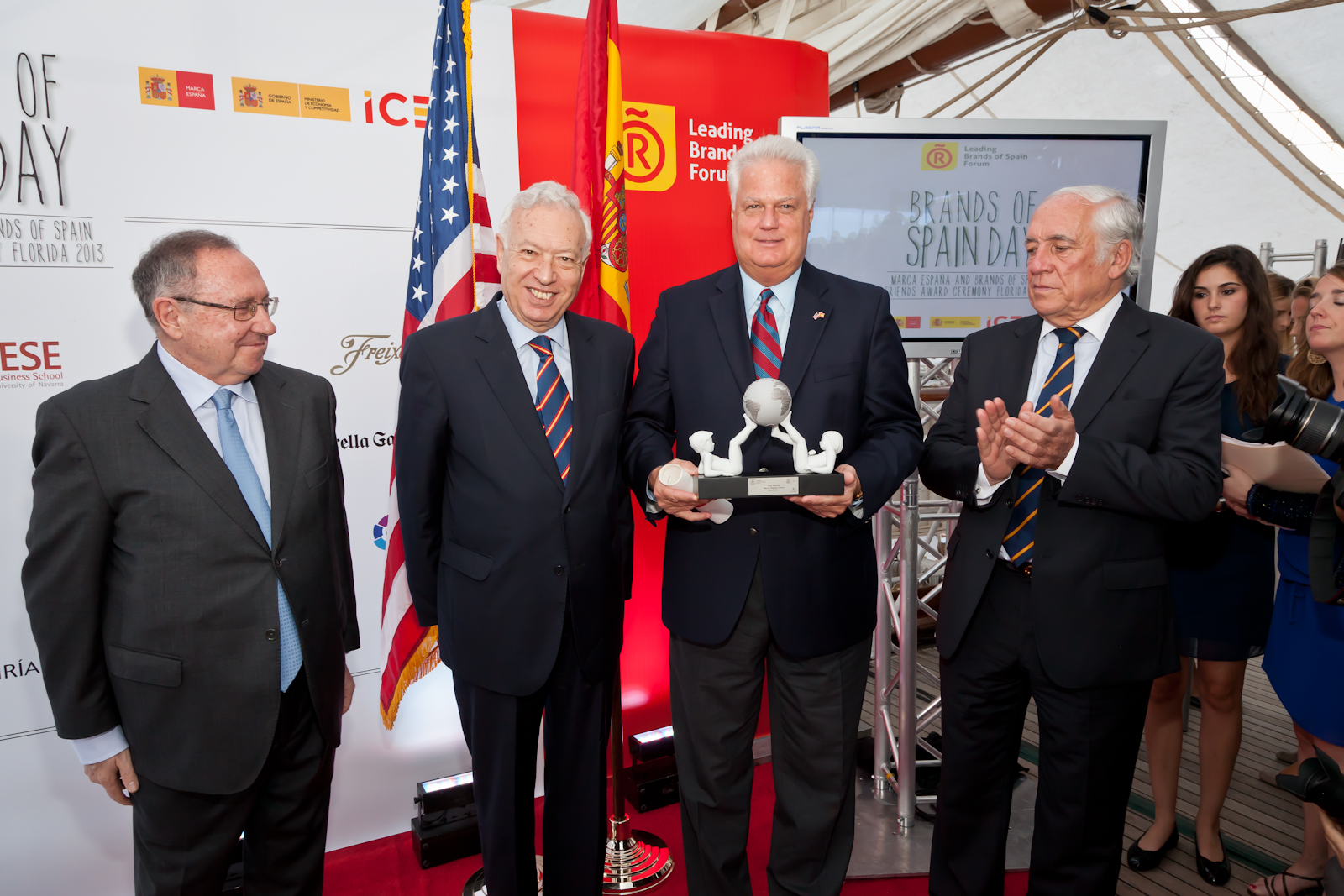 Secretary of State of the Government of Florida.

He has held the position since 2012. He was given the award by the Ministry for Foreign Affairs and Cooperation. 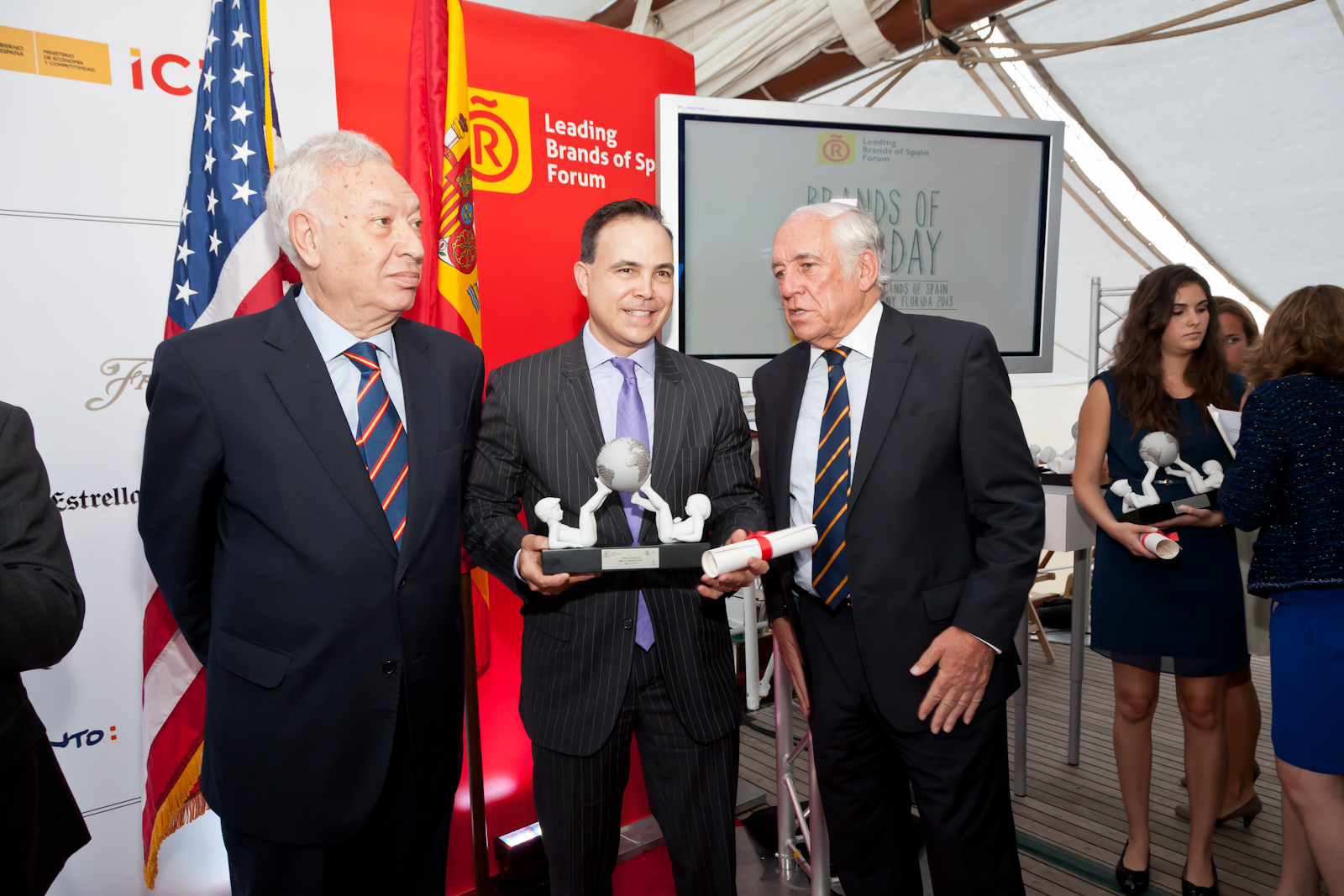 He has 24 years’ experience in the US Congress. The High Commissioner for the Spain brand presented the award. 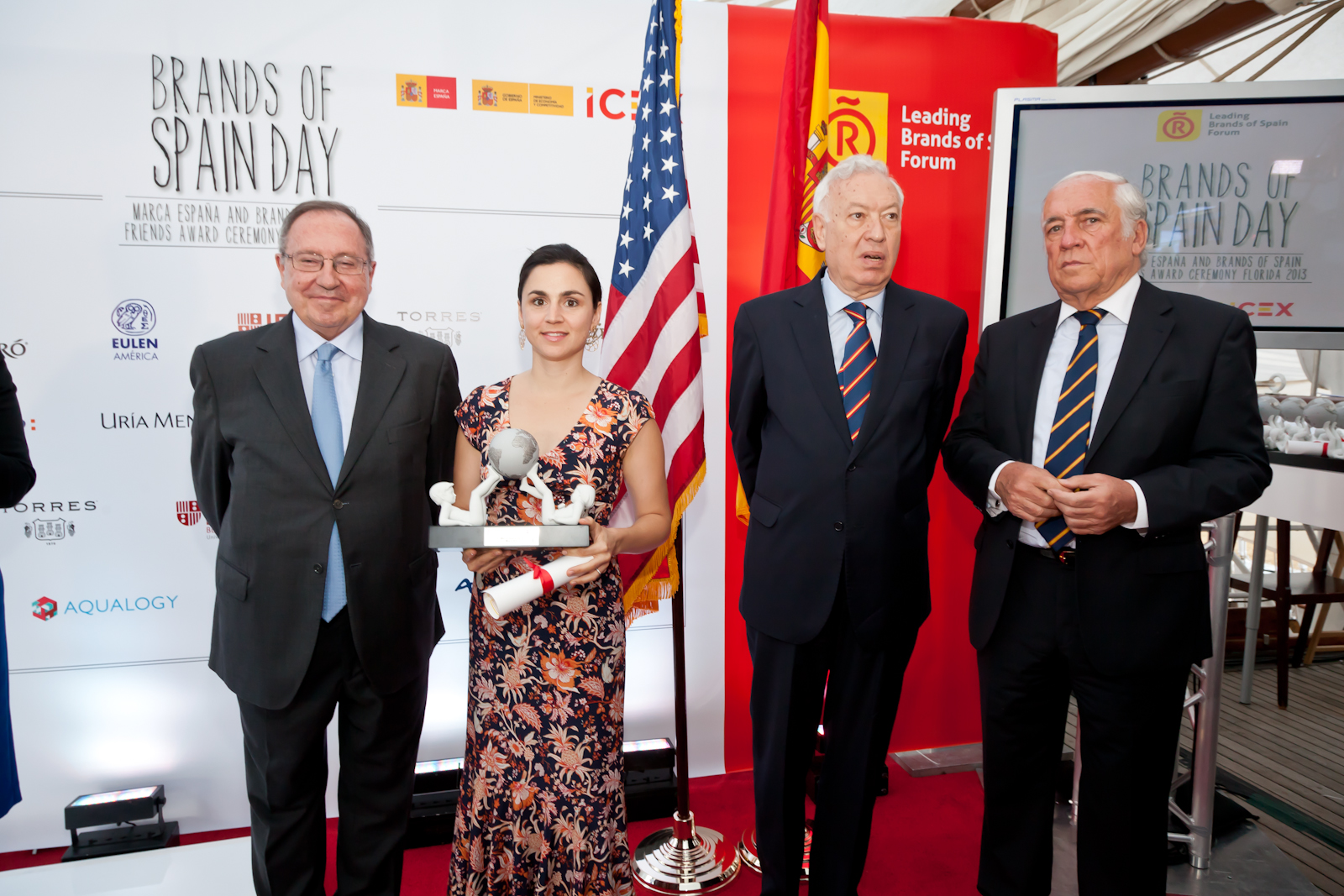 The portfolio of the company includes mixed-use projects, commercial buildings and other investments primarily in
Florida.  The award was presented by the president of the Leading Brands of Spain Forum and was picked up by his daughter.

He is widely recognised as one of the leaders of higher education in the world and is often invited to participate in educational policy forums in the United States and abroad.  The award was presented by the Minister of Foreign Affairs and Cooperation and was picked up by a representative of Mr Padrón.

Friends of the Spain Brand 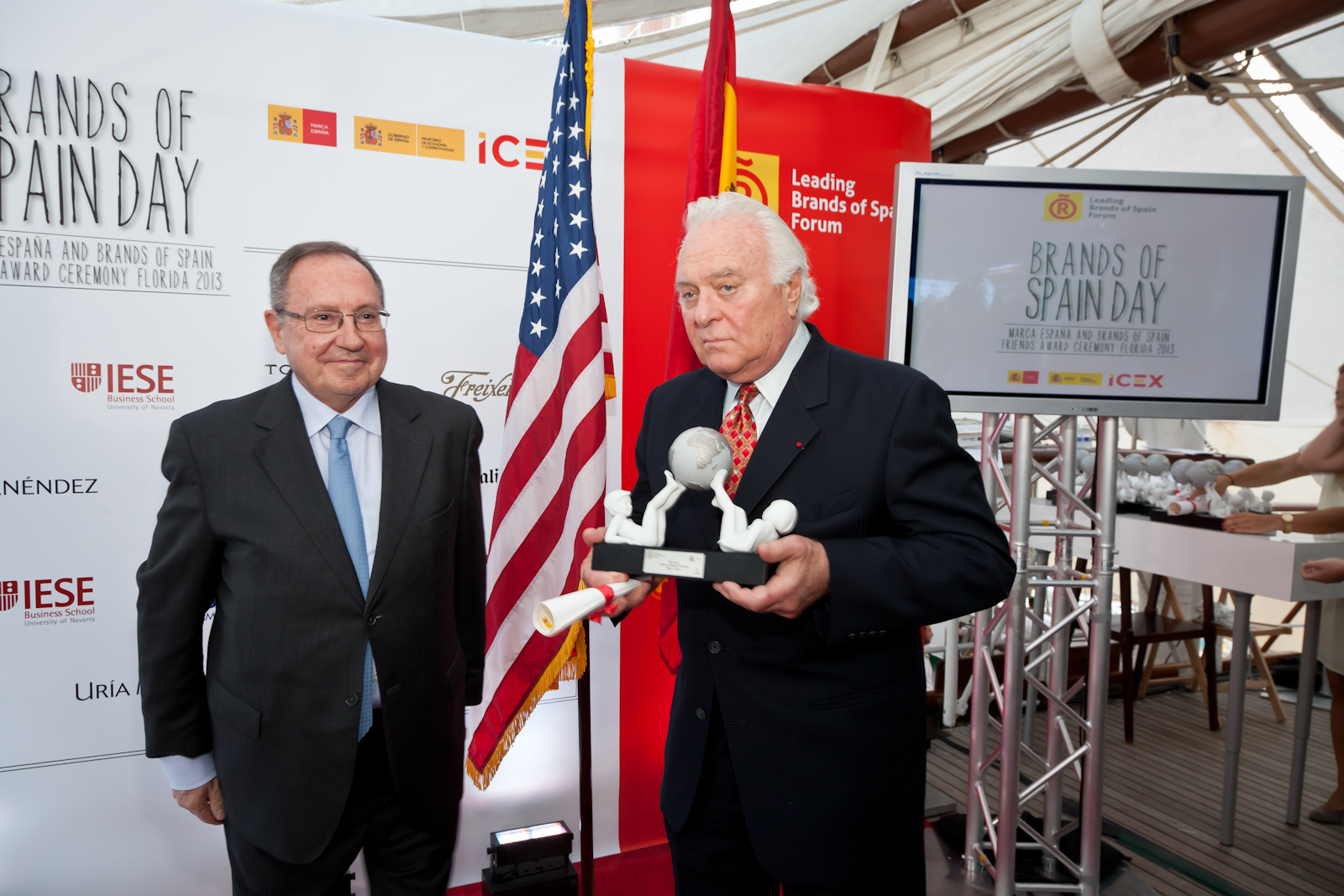 Wine Division President and Senior Vice-President of Southern Wine & Spirits of America, the largest distributor of wines and spirits in the country. He has been heavily involved in promoting Spanish wines in the US. José Luis Bonet himself presented his award. 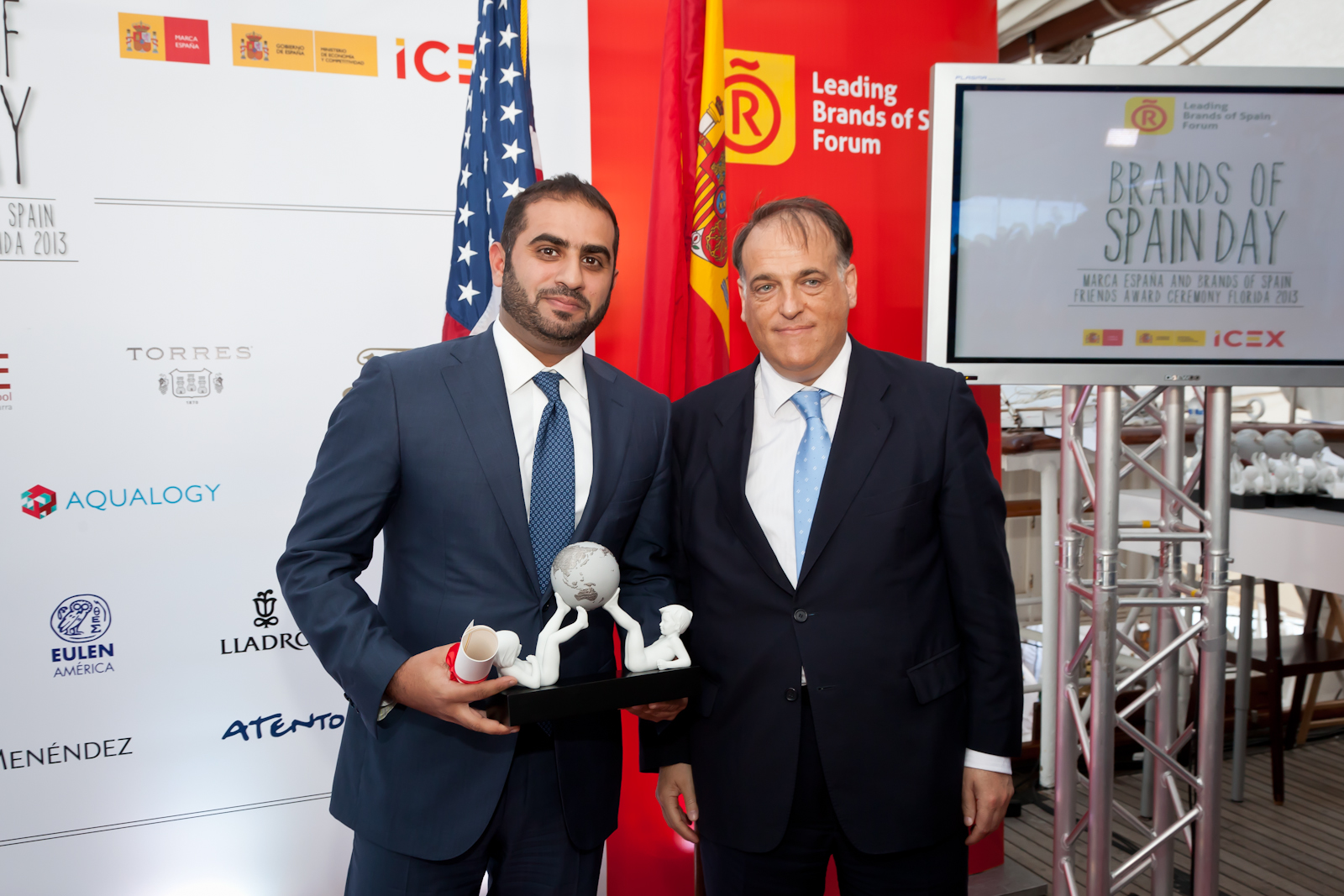 This is an American cable television network dedicated to the transmission and retransmission of sports programmes broadcast from Miami in English and Spanish.  It began in August 2012 and has since heavily promoted our sporting competition and been extraordinarily instrumental in disseminating the Spanish League.  The award was received by Yousef Al-Obaidly president of beIN USA and and was presented by Javier Tebas, president of La Liga.

Distributor who parlayed Estrella Galicia products in America since the Galician company took its first steps in the American market in the 90s.  The prize was given to Kitahori Fumie, Director of International Development for Estrella Galicia. 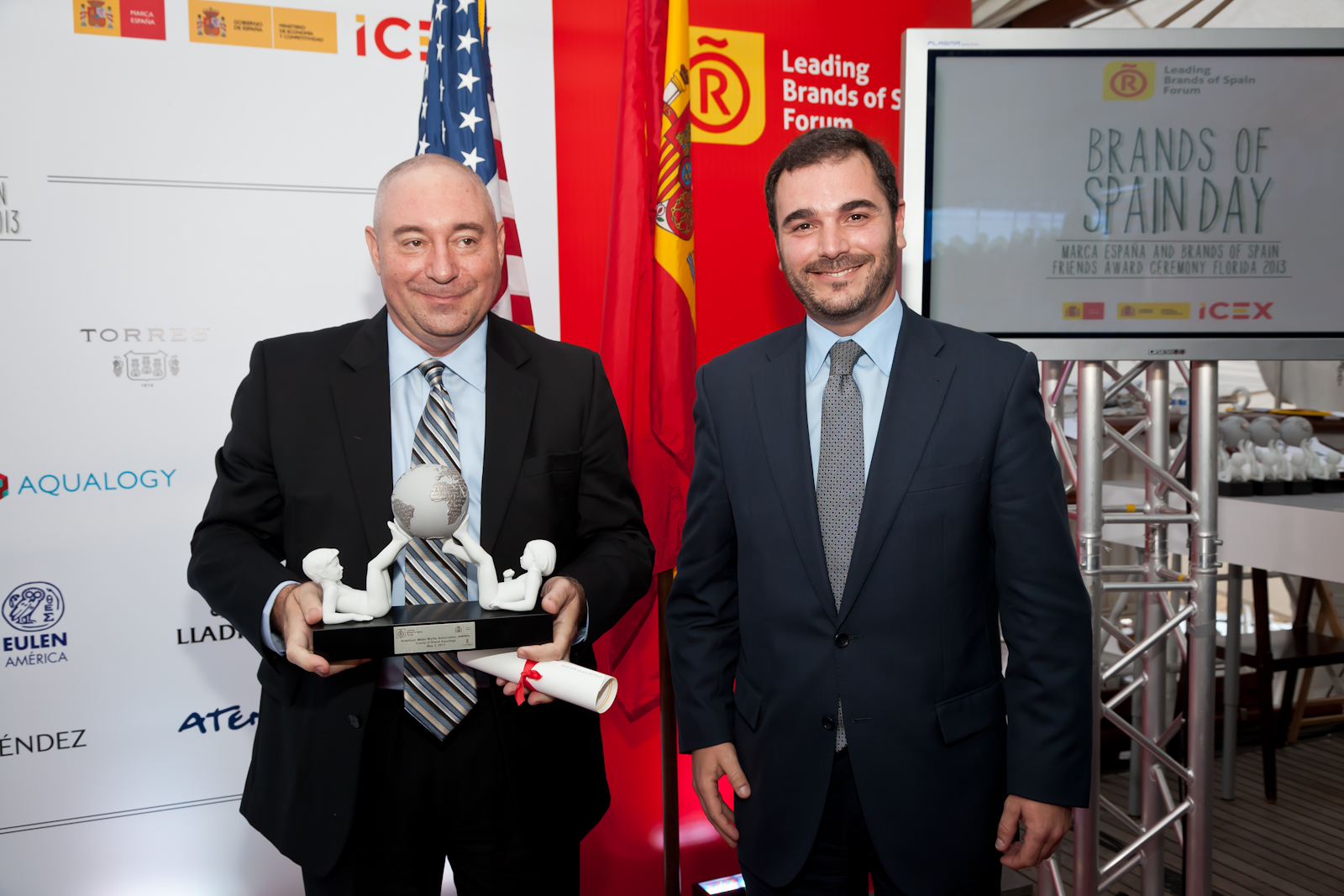 This is the largest non-profit scientific and educational association dedicated to the management and treatment of water.  Jeff Nash, Vice-President received the award, which was presented by Marcos Ruiz, Director of Aqualogy USA. 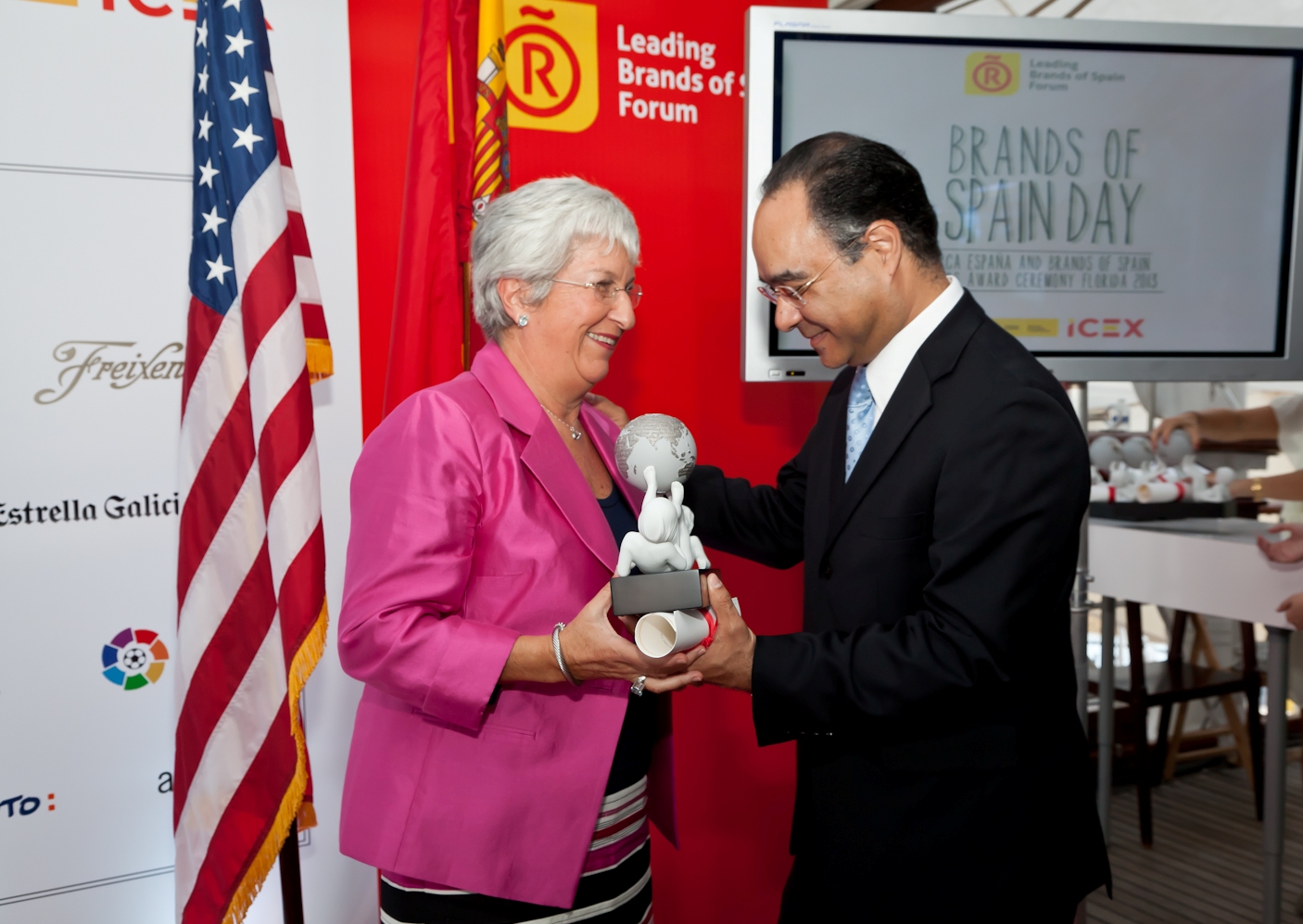 Banker by profession with over 40 years’ experience.  She has been instrumental in developing the strategy at IESE Business School in the United States.  Luis Casas, director of IESE Miami presented her with the award. 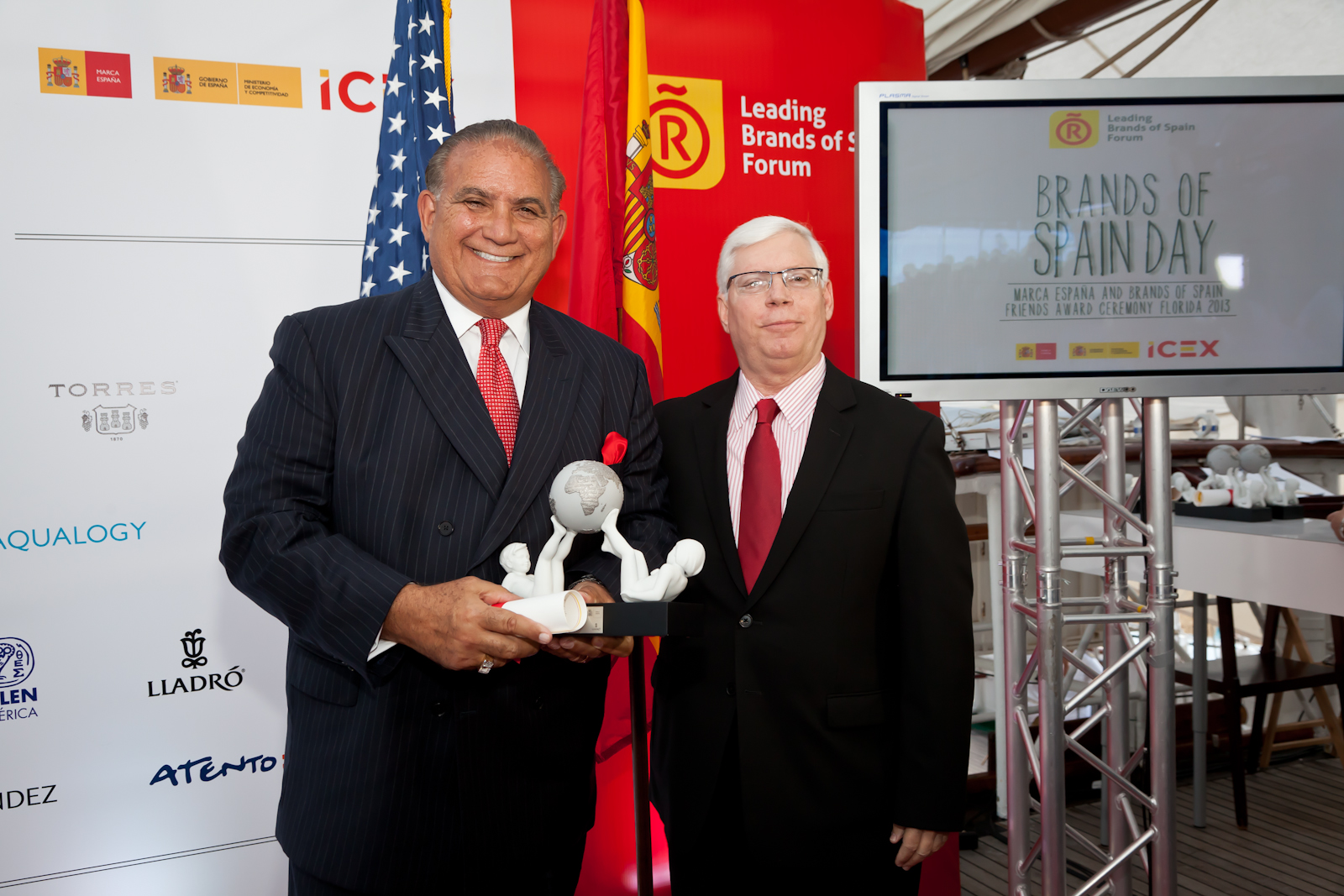 They own the restaurant ‘Columbia’, Florida’s oldest restaurant and are the ambassador of Spanish food and wine.  Casay Gonzmart collected the award. 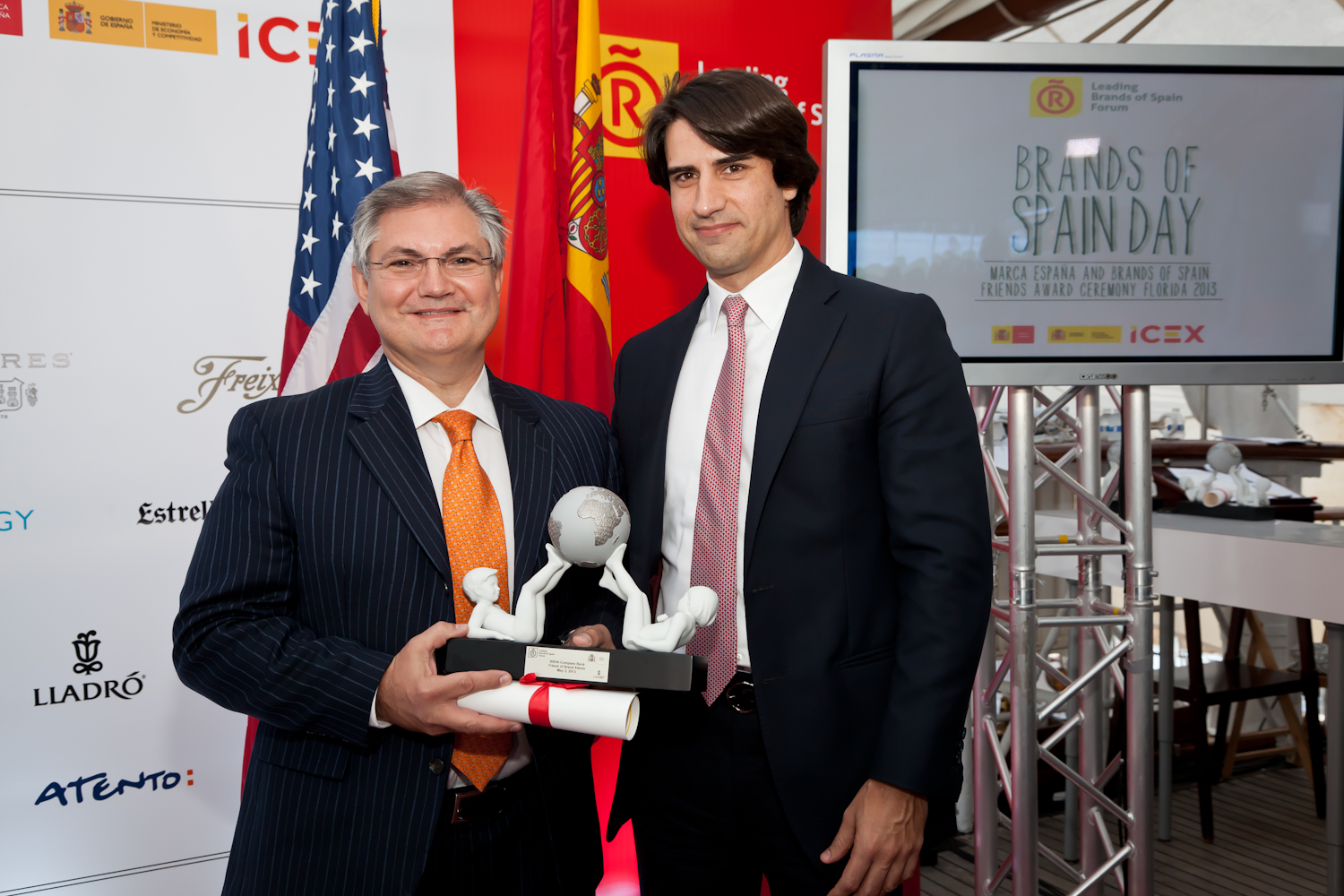 This bank is among the list of the 25 largest banks in the United States. Alejandro Carriles, Vice-President of Digital Channels was presented the award by Alejandro Reynal, Global CEO of Atento. 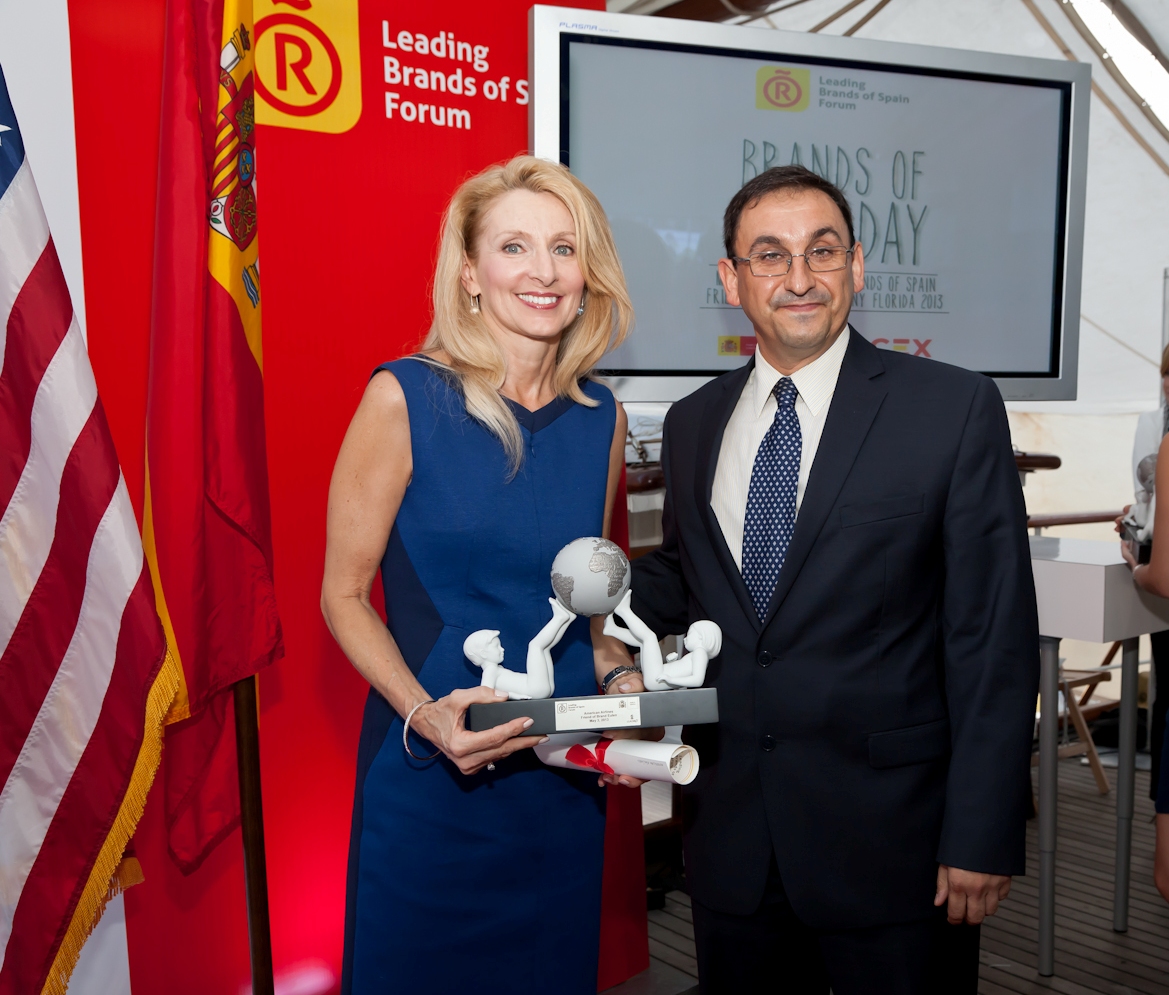 This is the world’s largest airline in aircraft in operation and the largest in terms of total operating revenues.  Marilyn Devoe, American Airlines, Vice-President of the Miami Hub, was presented the award by Luis Rodriguez, CEO of Eulen America. 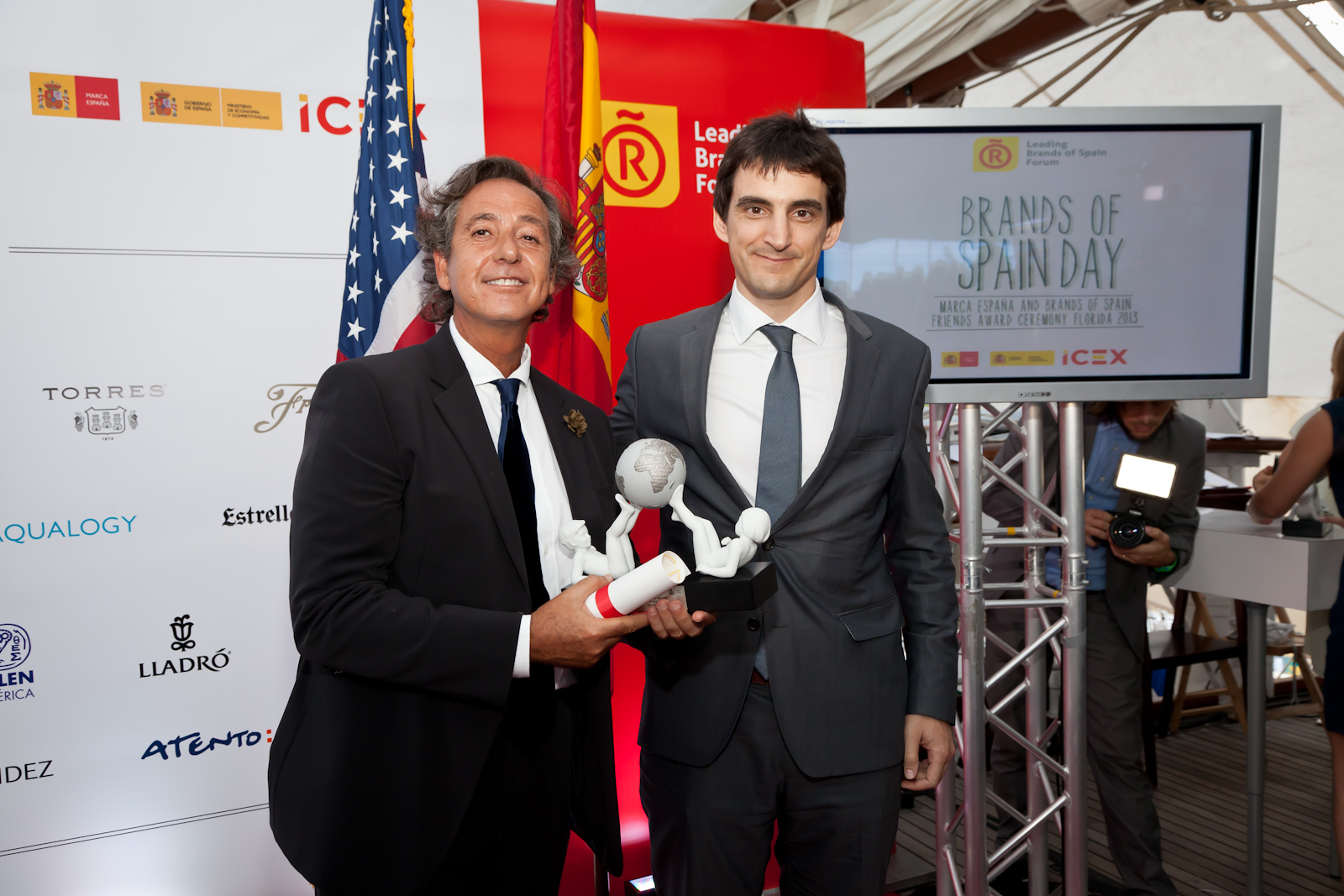 He is CEO of  Baeza Marketing and Sales Consultants. Xabier Urien, General Director of Arista presented the award.