Friends of Spain Brand in the UK

On 7 November 2011, The Prince and Princess of Asturias awarded, on behalf of the Leading Brands of Spain Forum and at a formal gala held in London, the recognition to the Friends of the Spain Brand in the UK. This ceremony is an initiative of the Leading Brands of Spain Forum that recognises those local figures who have distinguished themselves for their connection with Spain or its companies. The event took place as part of the gala dinner celebrating the 125th Anniversary of the Spanish Chamber of Commerce in the UK, held at the Landmark Hotel in London, in the presence of 500 executives from leading Spanish and British companies. 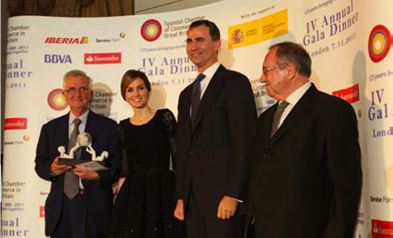 Former Minister of European and Latin American Foreign Affairs. Head of negotiations for the Maastricht Treaty and security issues, as well as international trade. Member of the Conservative Party from 1983 to 1986, he was Lord Commissioner of the Treasury and Treasurer of the Court of His Majesty in 1989. Throughout his life, he has been and is director of numerous Spanish and British companies. He is married to a Spaniard, Catalina Garrigues Carnicer, and is strongly linked to Spain. 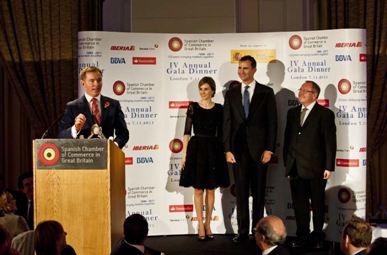 British MP, member of Labour Party, Former Minister for European Affairs and Undersecretary of Foreign Affairs of the Foreign Office and Commonwealth Parliament.

Born in Spain, he is a great admirer of Spanish culture and lifestyle. He has frequently supported initiatives related with Spain in London. 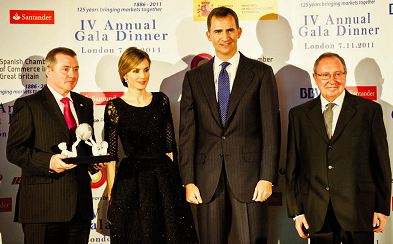 Following the merger of British Airways with Iberia in 2010, of which William Walsh is the top promoter, the third largest airline in the world was born in terms of annual revenue and the second largest group in Europe.

This merger represents a strategic alliance that strengthens the relations between the two countries to facilitate their trade and tourism flows.

Members of this Group of importers, distributors and wineries, they organise events related with Spanish wine, including the Annual Gala Dinner of the Noble Order at the Dorchester Hotel, which brings together leading representatives of British wine.

0
The awards ceremony for the “Friends of the Spain Brand” and the “Friends of Spanish Brands” in France was held on the evening of December 12 at the InterContinental Hotel in Paris-Opera. The awards were presented during the annual Gala Dinner of the Official Spanish Chamber of Commerce in France (COCEF). Participants in the event […]
Leer más »
Como la mayoría de webs usamos cookies. Si continúas navegando entendemos que estás de acuerdo. Aceptar
Puedes encontrar más información sobre las cookies aquí.
Privacy & Cookies Policy